To receive more info from Andrew Christian about a particular product, Click on the photo (photo will enlarge). 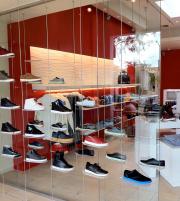 The entrance to Andrew Christian Sport.

(Filed Under wholesale Men's Underwear News). Andrew Christian is deepening his stake in retail with the opening of his first activewear boutique, marking the designer’s fourth store since opening his flagship in May.

This month the men’s designer opened the Andrew Christian Sport Boutique at 8941 Santa Monica Boulevard in West Hollywood; adjacent to his flagship boutique. The store carries a range of activewear styles, including underwear, swimwear, workout pants and T-shirts, as well as footwear.