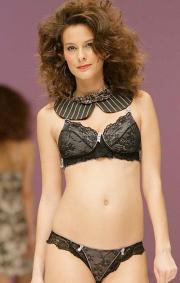 A model in HOTmilk Lingerie at the 2009 Salon de la Lingerie runway show.

After naming Scott Newton general manager in September, the maker of maternity and nursing lingerie has hired Sue Dunmore, most recently head of design for Bendon Ltd., as general manager of design. Dunmore will be based out of HOTmilk’s Aukland, New Zealand headquarters.

According to HOTmilk, Dunmore worked for Bendon Ltd. for over 10 years, and during that time developed the Elle Macpherson and Bendon maternity programs. She began her intimate apparel career as lingerie buyer for Marks and Spencer, and has also worked with Stella McCartney.

Dunmore praised HOTmilk for making functional yet sensual maternity intimate apparel. “For many years maternity lingerie was perceived as a necessary evil, functional and frumpy but most definitely not fun,” she said. “Little was done to celebrate the fact that you were pregnant and that it cold possibly be a time to feel gorgeous, glamorous and sexy. HOTmilk has managed to bring all of those elements together with their lingerie; they have taken all of the functional elements and they do the job but they are also feminine and fabulous – what a celebration.”

Since launching four years ago, HOTmilk has launched in 47 countries and services more than 850 retail customers globally. In the United States, the company’s branded styles can be found in Intimacy and A Pea in the Pod locations, among other specialty and maternity stores.