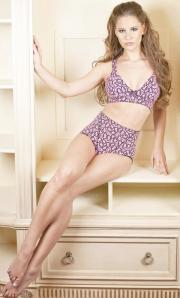 To accommodate its expanding business, the intimate apparel manufacturer, which is owned by former “Up All Night” host Rhonda Shear and her husband Van Fagan, will move its showroom, corporate office, warehouse and Maison Rouge, Rhonda Shear’s intimate apparel boutique, into a 12,450-square-foot building located at 12120 28th Street North in St. Petersburg; nearly triple the size of its current office.

The size of the new property also allows the company the option of doubling the building’s size in the future, which was part of the motivation for choosing it. Shear Enterprises plans to relocate to the new space early next year, which is near the Home Shopping Network Corporate office, where Rhonda sells her intimate apparel on-air.

“We have a splendid problem with both of our current facilities - we are bursting out of the seams!” Rhonda said. “The hefty new warehouse space will allow us to stock on-hand much more product. And, it will be so exciting having our own studio to produce entertainment productions, photo shoots, reality television and perhaps even revisit ‘Up All Night!’ My entire team feels the exhilaration accompanying this move, including the models that will now have magnificent dressing rooms with naptime stations for between shows on HSN! The possibilities are endless!!!”

Tyreen Prunick, director of sales for Shear Enterprises, said the new location will be designed with the boutique/showroom at the front entrance, followed by the corporate office/studio in the middle, and the warehouse in the back of the building.

In other news, the company reported that sales of its Ahh Bra continue to grow; currently, it sells approximately 1,400 units per day. The bra, which is sold in 13 countries, was recently picked up in Australia and The Netherlands.