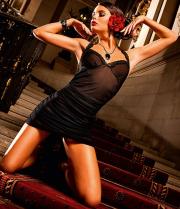 A Baci Lingerie style from the introductory catalog.

(Filed Under wholesale Lingerie News). Baci Lingerie reported that the brand was huge success at this fall’s Venus Fair, held from October 21 through 24 in Berlin.

Baci Lingerie was the main sponsor of the Venus Fair; Europe’s largest erotica tradeshow. The brand displayed its sexy line in a $950,000 booth, while staff members handed out gift bags and poker sets to all of the visitors at the fair.

“The reaction to Baci Lingerie was totally amazing,” Robert Rosen, C.O.O of Baci Lingerie, said. “Everyone was stunned at our booth and the displays. The lingerie and eyelashes were a huge success and our low price concept was one of the most discussed topics at the show. We received numerous requests from many people looking to become exclusive partners in their country.

“We made an extremely strong push to introduce our brand into the European market. Our advertising budget for the Venus Fair exceed 423,000 Euros and included 20 double-page ads. in the Venus catalog; 25-meter boards that were placed throughout the exhibiting halls of the fair; two custom-designed Baci Lingerie Porsches and one Bentley; premium ads. in major trade publications; Baci Lingerie bags and poker sets; and the main sponsoring of the Venus fair. We wanted to show the entire world our concept of delivering the highest quality of sexy and elegant lingerie, which comes with the best photographs and art work, in beautifully-designed premium packaging for the lowest possible pricing in the world.”

While Baci Lingerie was on exhibit at the fair, major wholesalers and companies met with the brand’s executives at the Adlon Hotel for a private viewing of Black Label, Baci Lingerie’s second collection, which encompasses 550 styles at a $20 million budget. The brand designed the Black Label collection with a high-end, European-chic style, but with prices that are 95 percent lower than brands like La Perla and Agent Provocateur.

“Meetings were extremely hard to come by and at the end we had 87 meetings,” Rosen said. “The Black Label collection is something the world has never seen before and will change the way people view the lingerie industry forever. The combination of the first and second collections will have more than 1,500 styles of beautiful lingerie and costumes available by January 2011, so there will be a style of lingerie for every woman in the world.

“We were really impressed with everyone we met with and it will be a very tough decision in selecting exclusive partners in the following weeks. We appreciate everyone’s interest in becoming an exclusive partner, and although we will only select one partner for each country we consider everyone part of our family.”

Baci Lingerie added that it is looking forward to meeting new partnerships and developing relations at upcoming shows, including Salon de la Lingerie, taking place in Paris next January.