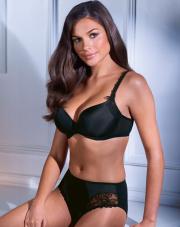 An Anita style from the Rosa Faia line.

(Filed Under wholesale Mastectomy News). At the October 16 “Race for the Cure” event in Miami, Anita International presented a $35,000 check to Susan G. Komen for the Cure, a global breast cancer education, research and awareness nonprofit.

This donation was nearly double the $20,000 Anita originally committed to donating due to higher sales than expected of its limited edition post-mastectomy Pink bra. The company donated $5 of every Pink bra sold from August to October.

“We are proud to support Susan G. Komen’s efforts to educate women about breast cancer screening and treatments,” Andrea Barbera, care manager of Anita USA, said. “Consumer reaction to the Pink Bra initiative was overwhelming, allowing us to donate almost twice the amount we anticipated.”

According to Anita, the company sets itself apart from the many companies hat create pink items in support of breast cancer awareness by creating functional post-mastectomy products, not just during Breast Cancer Awareness Month but year-round. “[We] specialize in creating comfortable, functional and beautiful undergarments for women undergoing mastectomy, including bras, swimwear and activewear, helping women through the process from discovery through recovery,” the company said.