To receive more info from Yummie Tummie about a particular product, Click on the photo (photo will enlarge).

Serafina Tank from the Pretty Powerful collection by Yummie 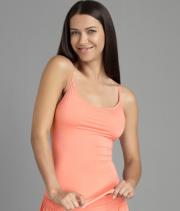 The design in question is Maidenform’s Fat Free Dressing Tank, which it launched last year as part of its Flexees line, and which Times Three Clothier says infringes upon its design patent.

On March 2 of this year, Maidenform filed a lawsuit in Manhattan District Court seeking a declaratory judgment that the Flexees tank does not infringe upon a design patent held by Times Three and is invalid, Nanci Prado, executive vice president and general counsel of Maidenform, wrote in e-mail to BODY, adding that the suit was prompted by Times Three Clothier contacting Maidenform’s customers about the patent. At that time, Times Three Clothier held one patent for its Yummie Tummie division, but has since acquired more.

In September, Times Three Clothier countersued Maidenform in Manhattan District Court for copyright design patent infringement. “After dedicating so much of my time and energy to creating a revolutionary product to benefit all women, I filed multiple patent applications to protect my innovation,” Heather Thomson, C.E.O of Times Three Clothier, wrote in an e-mail to BODY. “Maidenform knew about our pending patent applications and decided to knock us off anyway and exploit my innovation for their profit. Once our patents issued, we felt compelled to try to end this exploitation.”

But Prado claims that Times Three Clothier’s new patents cannot cover designs that were already on the market. “Maidenform intends to vigorously pursue its claim and defend against Time Three Clothier’s counterclaim,” she wrote. “The design patent on which Maidenform filed suit and the closely related patents which subsequently issued in the same family and have now been asserted by Times Three Clothier are not infringed by Maidenform’s products.

“They are also invalid and unenforceable because they attempt to cover designs which were on the market earlier and of which the United States Patent & Trademark office was unaware when it issued those patents.”

Maidenform’s Fat Free Dressing Tank Top retails for $38 and runs in sizes S through 2X. Yummie Tummie tank tops retail from $62 to $72 to and run in sizes XS through 3X. Both labels can be found on BareNecessities.com, while Maidenform’s Flexees is sold through Macy’s and Kohl’s, among others, while Yummie Tummie is sold through HSN, Nordstrom and Neiman Marcus, among others.