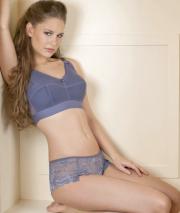 (Filed Under wholesale Lingerie News). Shear Enterprises' success can be summed up in one figure: on September 20, the company estimated that it had sold 3.5 million units of its Ahh! Bra, a style launched just shy of a year ago that has jumped into bestseller status. And according to Kelly Moore, director of development and merchandising for the Florida-based company, which is the brainchild of former “Up All Night” host Rhonda Shear, this number is constantly growing.

This development, as well as high profits across additional categories, has pushed the company's sales up 160 percent over the last year. These sales are comprised of all categories of business, which include HSN, where Rhonda has appeared to promote her product since 2003; Maison Rouge, the company's boutique in Saint Petersburg, Fla.; the Ahhh! Bra infomercial, also featuring Rhonda; the wholesale division; and electronic retailing.

During a September conversation with Rhonda Shear - whose catch phrases include “behind every great woman is a great behind” and “foundation is where fashion starts”- it became clear that success has done the opposite of slow the executive and her team down. Rhonda, who co-owns Shear Enterprises with her husband, Van Fagan, quipped; “We have so much going right now, we are definitely in expansion mode,” and the interview revealed that this statement is no exaggeration. The company churns out merchandise in sizes XS through 4X ranging from bodyshaping intimates to seamless to sleepwear, and everything in between, at the accelerated pace television demands. Its product line now amounts to 72 styles sold on HSN, with new styles each month in three colors and eight sizes per style across six collections, adding up to a total of 1,728 SKUs.

Among the developments Rhonda is particularly excited about are the recent launch of Shear Noir, which she called “a baby of mine,” and Dote on Dots; two medium-compression bodyshaping collections that transition into lingerie, with select pieces that can even be worn as outerwear. Styles include Dote on Dots longline shaper and underwire bra, both constructed from mesh fabric; and Shear Noir's lace shaping slip dress; lace twist bra; convertible strapless satin longline bodysuit; and camisole. Retail prices run from $29.90 to $59.90 for shapewear and daywear silhouettes, and $79.90 to $199 for specialty lingerie and nightwear; higher priced than most Shear Enterprises products.

“Shear Noir is really sensual, shaping yet lightweight,” Rhonda said. “It's our couture end, with deep, rich teal over nude, and black lace over nude; one of my favorite color combinations. To give the collection more of a lingerie feel, I thinned out the straps. This is an incredibly seductive line; it appears sheer, but it has extra lining underneath for coverage.”

Both Dote on Dots, which Rhonda described as “more playful,” and the “more seriously sexy” Shear Noir, target a younger crowd than the traditional HSN customer. This, Rhonda said, fits in with the network's current direction.

“HSN is targeting a younger, trendier audience [with the additions of] Tori Spelling, Badgley Mischka and Yummie Tummie. Shear Noir and Dote on Dots are definitely designed with this customer in mind,” she said.

Also in September, the company replenished its sleepwear offerings by launching the D-Lites cotton rayon sleepwear collection as part of its Cozy Couture group, which includes five styles, with three additional styles slated to launch early next year. With sizes ranging from XS through 3X and retail prices from $19.95 to $29.95, Rhonda, a self-described “curvy girl,” said she and her team ensured that the sleepwear has superior fit.

“I have always been full-busted and I have always been a nightgown girl, but most nightgowns offer so little support,” Rhonda said. “I always say that my nightgowns are 'mother-in-law approved;' they can double as tunics or cover-ups, and are super cute with little bits of lace and details while remaining extremely comfortable.”

“Sleepwear and loungewear above all should be comfortable, and we worked very hard to find the right supple hand that complemented our versatile designs,” Moore added. “You can go from bed to running errands and still look great.”

The D-Lites label also encompasses styles made with the company's Butterknit fabrication, aptly named because the fabric feels as soft as butter, according to the company. Introduced in a single gown in 2007, the company has since used the fabrication in 10 styles including bras; panties; robes; and seven additional gown designs. They are available in sizes XS through 4X at a retail range of $9.95 to $19.95 for daywear and $29.95 to $69.95 for sleepwear.

“I always start with fabric, and take a collection from there,” Rhonda explained. “I am super-girly, but I don't make everything super-girly because there is a sporty girl out there, but I like textures to be ultra-soft and sensual. We are constantly on the hunt for great, new fabrics.”

But this formula of high volume mixed with quality fabrics, fit and fashion, at a price and size range accessible to most women, was not achieved overnight, Rhonda emphasized. The double-time pace of HSN has taught the company what works, and doesn't work, for the consumer.

“The great thing about HSN is that I get to listen directly to my customer,” she said. “Every time I put something out [on the network] I am going after their 'sale of the day.' Over the years, we've been learning from our mistakes, we've started over and over again to get the perfect recipe, building upon what we've learned. If a customer says we need to improve upon something we do it; because it is television, they eat it up and spit it out, and they want new. HSN likes it fresh, and so do the customers, so I never redo a color, expect for the basics, and that way they are always getting something new.”

And when Rhonda's pace starts to border on frenzied, her husband and business partner helps her focus. “My showbiz background makes me want to do, do, do it, and Van slows me down, and reassures me that we'll get to it,” she said.