To receive more info from CoCoon about a particular product, Click on the photo (photo will enlarge).

Shaper by CoCoon and bra by Leonisa. 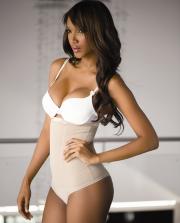 (Filed Under wholesale Shapewear News). Co’Coon, a Colombian shapewear manufacturer with offices in Doral, Fla., is cultivating its U.S. staff by hiring a visual merchandiser and a fashion graphic designer.

On October 1, the company hired Michael Aleman as visual merchandiser, a new position based out of the company’s Doral office. Aleman’s previous experience includes five years as visual merchandiser with Macy’s Florida. In that position he was responsible for visual merchandising presentation and directives of all center core areas, including intimate apparel, for all 50 Macy’s stores in the state. According to Co’Coon, he conceptualized and implemented creative solutions for window and interior displays that positively impacted business, elevated the brand and enhanced customer experience.

Rafael Segarra, director of special projects for Co’Coon, described this hire as essential to increasing brand exposure in the U.S., which the company entered in 2007. “We have been looking for someone [of] the caliber of Michael to help Co’Coon branding in the 80 mall kiosks across the U.S. as well as the new contract with contract [for] private labeling with Navarro Pharmacy, a 28 chain store, in the South Florida area,” he said. “The idea is bringing branding awareness and give customer customers a feeling of security and satisfaction when purchasing our bodyshapers.”

In September, Co’Coon hired Katherine Castaneda, a graphic designer with over 15 years of experience, as fashion graphic designer for its U.S. branch. “[We] have several graphic designers at [our] manufacturing plant in Latin America, but since growth has been steady and positive we have decided to open a much-needed division for the U.S. market,” Segarra said. “Mrs. Castaneda will be in charge of directing the graphics department in the U.S. market, which differs from the rest of the world. The graphics will be specific to advertising and Internet marketing in the U.S.”

A native of Bogota, Colombia, Castaneda has been the design director for Colombian companies including Bolivar Insurance, National Planning Department of Colombia and the newspaper Oveja Negra.