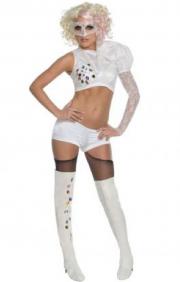 (Filed Under wholesale Costume News). Halloween is always a parade of pop culture and fashion trends, and according to Party City, this year will be no different. The party goods and Halloween chain anticipates that Lady Gaga and “The Jersey Shore” cast member costumes will be among the looks many revelers will wear for the holiday.

While Lady Gaga and the cast of “The Jersey Shore” may be different, both are known for their outrageousness. So it is no surprise that Party City expects it be a particularly extreme season.

“This year, Avant Garde hits mainstream and, as a result, the 2010 costumes are expected to be completely over the top,” Melissa Sprich, top costume merchandiser for Party City, said. “The fashion world right now is about fusing together high-fashion looks with pieces that are completely individualized.”

Other trends the retailer expects to see are 1980’s comebacks influenced by Madonna’s “Material Girl” era styles; Greek Goddess looks based on this year’s gown trends; and a continuation of the vampire costumes that were popular last season, brought back by the “Twilight” tween film and the “True Blood” television series.

Amscan Holdings Inc. is the parent company of Party City, which operates just over 600 company-owned and franchised stores throughout the United States and Puerto Rico.