To receive more info from Seven til Midnight about a particular product, Click on the photo (photo will enlarge).

A Seven til midnight style.

Seven ‘Til Brings Young To ILS 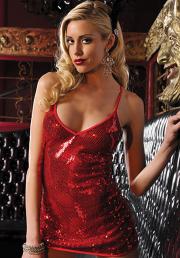 A Seven til midnight style.

The brand exhibited its holiday collection at the show, which was designed based on the film noir stars of old Hollywood. It also showed its range of fantasy-based costumes, which the company said has become a mainstay in the intimate apparel market. The fantasy-based costumes wholesale between $10 and $13.