Bravada To Hit Calgary As Part Of Growth 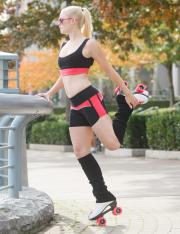 (Filed Under wholesale Activewear News). With Calgary's robust economy and fitness-oriented culture, Bravada International sees the Canadian province as ripe for expansion. The health-oriented retail and media company-which opened its flagship Bravada Athletica store in Los Angeles this June and produces shows including “The Spin Crowd” on E! Entertainment and “Mel B; It's a Scary World” on the Style Network-announced plans to open its Canadian Bravada Athletica headquarters in Calgary. The company also said it hopes to open a Bravada Athletica store in the city before Christmas.

According to the company, Calgarians have one of the highest disposable incomes and are among the fittest populations in North America, making the city perfect for a Bravada Women's Athletica activewear store, which, like the Los Angeles store and e-commerce website, will sell activewear styles by Vata Brasil, a Canadian manufacturer. Canada as a whole, the company said, is experiencing economic growth and was not as impacted by the banking crisis as the United States. In addition, Danny Alex, CEO of Bravada International, grew up in the city.

Bravada also plans to establish a franchise network and expand the reach of its e-commerce website, BravadaWomen.com, across North America.

Daniel G. Langevin, COO and part-owner of Vancouver-based Vata Brasil, said the company is “more than pleased” to be working with Bravada. “They are very aggressive,” he said. “Danny Alex knows the fitness and performance industries very well, and he very well connected on the west coast. Mel B. [the former Spice Girl] is now associated with them, and was on the E! channel with Danny Alex wearing Vata Brasil. They are extremely well-connected with the Hollywood mileau, and as you know product placement is a part of marketing.”

Langevin reported that Vata Brasil plans to continue to collaborate with Bravada, and will be developing a private label collection for the company.

Bravada certainly makes use of celebrity endorsement on BravadaWomen.com. The site's homepage has images of Karina Smirnoff of “Dancing With the Stars” and Mel B. wearing the designs, which it describes as “sassy and sexy Brazilian style.”