To receive more info from Raveware about a particular product, Click on the photo (photo will enlarge). 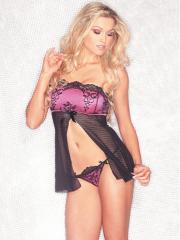 (Filed Under wholesale Lingerie News). Raveware Lingerie has deepened its domestic presence with the addition of nine sales representatives.

The California-based producer of sexy lingerie and related merchandise has added Robb McCullough, Patty Barrington and David Skelton on the west coast, Sue Kellen and Kimberly and David Dillon in the Mid West, and Jim Hoye, Sue Dressler, Bob Keyes and Ron and Howard Titlebaum on the East Coast.

“As a former sales manager, I have not only had the privilege to work with some of the best representatives in the business, but I’ve also made great friends with many of them,” Sean Monahan, president of Raveware, said.

“While most would not be here if the Raveware line was not as strong as it is, I could not ask for a much better sales force than the all-star cast we have behind us now.”