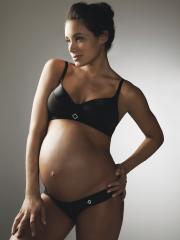 (Filed Under wholesale Maternity News). HOTmilk Lingerie, a New Zealand-based maternity and nursing label that prides itself on producing fashionable-yet-functional styles, is simplifying its line for spring 2011. The company is launching the Essentials collection of seamless bras and matching panties adorned with minimal fashion details.

The collection will hit stores next January at a retail range of $49.95 to $58.95 for bras and $24 and up for matching panties. With the launch of Essentials, the company is debuting bras in the H cup size.

Lisa Ebbing, director of HOTmilk, reported that the company designed Essentials in response to market demand. “We spent a lot of time researching what a new mom wants and needs in her nursing bra,” she said. “This collection caters to the woman who prefers a functional bra that seamlessly fits into her wardrobe, but also has a touch of fashion details to keep her looking and feeling feminine and sexy.”

In addition to bra and panty sets, Essentials will include shapewear, a new category for HOTmilk, in natural, nude and black shades. The introductory collection encompasses three styles; Blaze, a seamless satin and microfiber fabric blend in black; Luminous, a cream-colored satin and lace blend with ribbon and diamond accents; and Radiance, a nude bra set with ruching and ribbon accents. The company plans to eventually have four to six styles in the ongoing line.

In other news, this fall HOTmilk will launch a revamped website with a direct-to-consumer section. Scheduled to go live in mid-September, the site will offer shopping options to the United States market. Visuals will be from the company’s “Real Life” advertising campaign, featuring photographs of “real life” pregnant women rather than professional models. The site will also include the interactive “Your Journey” section for consumers, with information on pregnancy, breastfeeding, diet, exercise and sex.

Lisa Ebbing and Ange Crosbie founded HOTmilk Lingerie in 2006. According to the company, its branded styles can be found in 756 stores worldwide. Approximately 40 retailers in the United States carry the label, including Intimacy locations; Destination Maternity Corporation; Donna Bella in Corvallis, Ore; and The Upper Breast Side in New York City.