To receive more info from Ozone Socks about a particular product, Click on the photo (photo will enlarge). 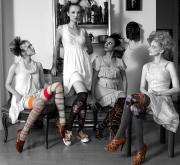 (Filed Under wholesale Socks News). Ozone Design, Inc. is taking us to Japan and India next spring. “Recently, we have been focusing on travel narratives in our collections,” Saba Juneja, designer for the producer of fashion socks and hosiery, explained. “Some of the designs seen this season are kimono patterns, Sakura flowers, Indian wedding garlands and Henna motifs.

“We also have new techniques, which allowed us to make some lacy, delicate and feminine socks, such as sheer styles that almost look embroidered, [but] still maintain our signature edginess. These are perfect for spring, because the season calls for feminine, bright and delicate legwear. Previously, the techniques we used were mostly cotton blending and bright colors. This season, more than ever, we are thinking of legwear [styles] as individual accessories rather than intimates.”

With the advent of the new techniques, the company’s spring 2011 encompasses between 20 and 25 styles compared to the 18 launched for last spring. The majority of pieces wholesale from $6 to $10 for crew-length socks, $9 to $15 for knee-highs and $11 to $17 for over-the-knee styles, but styles knit in Japan will run at higher price points. While the majority of legwear is designed for women, Ozone produces a small amount of men’s and unisex styles each season. The entire line runs in One-Size.

In the marketing arena, since hiring Björn DelaCruz as director of this area in March, the company has honed in on self-promotion. Juneja reported that “with a new person at the company with a marketing focus we hear fresh ideas and have been focused in that direction. We have revamped our website, utilized social media more and have been updating our blog more frequently. We have also done more advertising than ever before through our sales representatives and with the tradeshows.”

According to Juneja, these efforts have already yielded results. The company, traditionally sold exclusively in specialty stores, has landed big name accounts including Anthropologie, Nordstrom and Canada’s Holt Renfrew, which are testing the label in select stores.

“We are still mostly working with specialty stores because we are not something you would find just anywhere, and we really fit well in boutiques,” Juneja said. “It’s exciting, though, to also be working with new accounts because they offer us new opportunities.”