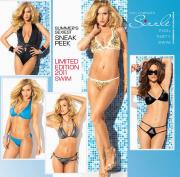 (Filed Under wholesale Lingerie News). Frederick’s of Hollywood announced on August 18 that it has finalized plans to outsource all remaining manufacturing processes, which are based in the Philippines, and is in the final stages of consolidating its distribution facilities. The company expects to save approximately $2 million annually through these actions.

Frederick’s of Hollywood plans to shutter its wholesale distribution facility in Poplarville, Miss. by November 30, 2010, and will consolidate retail and wholesale distribution to its 168,000-square-foot facility in Phoenix, Ariz. It expects to save approximately $500,000 annually as a result of this consolidation. Frederick’s of Hollywood did not release any information regarding how this will affect workers at the Poplarville location.

The company, which returned to profit during the third quarter ended April 24, 2010 following several weak consecutive quarters, has implemented measures in recent months aimed at improving its financial health.

“The latest changes to our manufacturing and distribution capabilities are in line with the strategy we have implemented over the past 18 months, which is aimed at streamlining our operations and reducing costs,” Thomas Lynch, chairman and chief executive officer of the company, said. “These changes are expected to reduce total costs by $2 million annually, and positively impact our operating margins. Consolidating the distribution of our products to the Phoenix facility and fully outsourcing our manufacturing will allow us to dedicate more resources to the marketing and design of our products in order to strengthen our brand.”