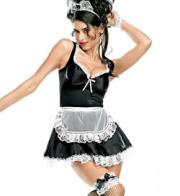 (Filed Under Financial and General Interest News). Frederick’s of Hollywood Group Inc. said it has entered into a financing agreement which provides for a $7 million term loan through Hilco Brands, LLC (an affiliate of Hilco Consumer Capital, LLC) and its partner Infinity FS Finance I, LLC (an affiliate of Infinity FS Brands, LLC). Proceeds from the term loan were used to repay the company’s $2 million bridge loan and the balance will be available to Frederick’s as additional working capital.

“We are pleased to announce the closing of this new $7 million term loan, which caps a multi-step process to recapitalize the company in 2010. As a result of these efforts, we have effectively established a solid foundation from which to further implement our strategy to grow and expand Frederick’s of Hollywood into a global lifestyle brand,” said Thomas Lynch, chairman and chief executive officer of the company.