Trade Readers:
I am a STORE BUYER or OWNER
I am a Manufacturer’s Rep
I am a Distributor
I am a Textile Supplier
I am a Banker or Factor
I am an OEM Producer
I want to receive more info from this company about its products
I want to receive a catalog from this company
I want to learn more about carrying this brand in my store; have them contact me
I would like to become a manufacturer’s representative for this company; have them contact me
I want to comment on this brand
I am a store owner/buyer who would recommend this brand to other stores 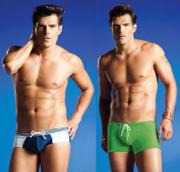 First to launch is a collection of men’s swimwear (including briefs, bikinis, square cuts, boxers and board shorts) that was on display at the August MAGIC show in Las Vegas.

An interesting bonus for consumers is that many of the Vuthy swim styles are reversible. When turned inside out they become completely new designs; the customer gets two for the price of one. Vuthy created these styles for vacationers who want to pack light, but still have variety in their swimwear.

For the February 2011 installation of MAGIC, Vuthy plans to expand the line with more swimwear, and to add shirts, underwear, and other casual items.

Now based in Maine, Vuthy Sim previously produced a line of men’s casual wear from New York that was carried in stores across the U.S. and in Europe. His creations also appeared in the Broadway productions of “Jesus Christ Superstar” and “Spamalot.”

Great Deals Distribution is the exclusive outlet for Vuthy. The company also handles such mens lines as Clever, Pikante and Candyman, among others. Vice president Camilo Escobar was at the recent CurveNY showing several of the brands.