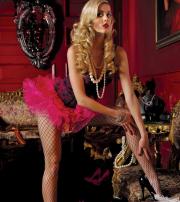 A Seven 'til midnight style.

Vinh Luong, director of sales and marketing for Carrie Amber Intimates, reported that entering these regions falls in line with the company’s plans for Seven ‘til Midnight. “The decision to pursue these markets came naturally as part of Seven ‘til Midnight’s expansion and the shift in global economies brought about new retail and wholesale opportunities in these regions,” she said. “Traditionally, North America and Europe have been the major markets for intimate apparel. With the economic growth in Asia and [Eastern] Europe, the intimate apparel segment is being increasingly recognized as providing potential market opportunity in these geographical zones.”

“Lingeriemoda di Francesco Mariani […] Has demonstrated a healthy record of sales in the retail and wholesale areas, and is progressively pursuing and establishing [its] online presence with a dedicated budget toward online advertising. [The company] already has a fan base of over 17,000 of Facebook.”

In other news, the company will show the Seven ‘til Midnight holiday catalog at MAGIC, taking place in Las Vegas from August 17 through 19. As reported in the July issue of BODY, the catalog features Playboy Playmate Heather Rae Young, and includes looks inspired by classic Hollywood glamour. It debuts Seven ‘til Midnight’s first collection of sleepwear, called Bonjour Beaute.

Luong reported that this is Seven ‘til Midnight’s first time introducing a new collection at MAGIC, although the brand has exhibited at past shows. “This is in response to the increased demand from both domestic and international mainstream and apparel stores that are interested in carrying lingerie,” she said.

Seven ‘til Parties For a Cause
Carrie Amber inks distributors