To receive more info from Bad girlz about a particular product, Click on the photo (photo will enlarge). 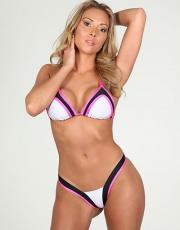 (Filed Under wholesale Dancewear News). Miami-based Bad Girlz will be heating up the clubs next year with its spring/summer 2011 line of dancewear. “It has a lot of bright colors, mostly in metallics, like purple, turquoise and hot pink,” Elena Monsanto, head fashion designer of the company, said. “I also used a lot of white because it looks great under the black lights at the clubs.”

Monsanto, original from Russia, added that she brings her country of origin’s flair to her designing, differentiating the upcoming collection from those of the past, which were made by an American designer. “I have added some Russian flavor, such as more feminine touches, and embellishments like metal buckles and rings,” she said.

The 30 total silhouettes, each offered in four different colorways, include thongs; bootie shorts; skirts; mini dresses; mini skirts; gowns; and leg and armbands. The majority of styles wholesale from $18 to $30, while gowns wholesale for up to $40.

Unlike much of the dancewear on the market, which runs in one-size-fits-most, Bad Girlz sizing runs from S through L. “We offer three sizes to give the girls more variety,” Monsanto said. “These days, there are girls of different sizes working at the clubs. Sometimes, there are even pregnant girls!”

In the interest of staying in tune with this market, Bad Girlz employs current and former dancers. “This makes a huge difference in being able to design what the girls want, because I am getting input directly from the stage,” Monsanto said.

JC Celestine of Diamond Boutique, an Atlanta-area business that sells directly to local clubs, has experienced success with Bad Girlz since picking up the brand six months ago. “I got introduced to them by a marketer because I was looking for a company that would put rhinestones on the outfits the way I liked them, and there are very few manufacturers who will do this for a reasonable price,” she said.

“In the south, if you don’t stone the outfits, you will not be successful, and Bad Girlz really understands this market. Their garments also have an excellent construction with good quality material; they look great on stage as well as off, and they won’t lose their shape. The costumes they offer are different from what is on the market.”