To receive more info from La Jock about a particular product, Click on the photo (photo will enlarge). 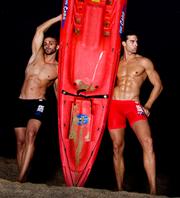 (Filed Under wholesale Men's Underwear News). This spring, Nir Zilberman shared with BODY that he was planning to expand his men’s retail concept, and now the expansion has begun. With the goal of catapulting his company into the global market, Zilberman, originally from Israel, has launched the e-tail store LAJock.com, and has changed the name of his three retail stores, all located in Los Angeles’ West Hollywood neighborhood, to LA Jock fro

m their former name of Just One LA.

In conjunction, Zilberman has introduced his first swimwear collection under the LA Jock name with the tagline “born in Israel, designed in LA, and made in Barcelona,” to reflect its global reach.

According to Zilberman, the new branding is an accurate reflection of what his company offers to the consumer. “Los Angeles is where fashion starts,” he said. “Men from all over the world want to look like the well built, sun-kissed, tanned L.A. man. That’s why LAJOCK.com is more than fashion. We’re promoting the L.A. lifestyle.”

LAJOCK.com carries men’s underwear, surfwear, accessories and activewear from brands around the world, including ES underwear and swimwear from Spain and Go Softwear from California.

He described the swimwear line as essential for the Los Angeles man, who, on average, spends $90 on a pair of swim trunks, while the average man in most other U.S. regions spends $30. “The L.A. lifestyle is a healthy lifestyle,” he said. “Men are incredibly fit and are always active, whether at the gym, on the soccer field, or on the volleyball court.”