To receive more info from Calvin Klein about a particular product, Click on the photo (photo will enlarge). 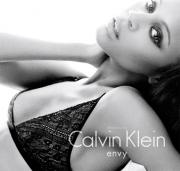 The fall campaign will introduce Calvin Klein Underwear’s Envy range of lingerie, which offers the brand’s most revealing silhouette, identified as a level one. With this launch, Calvin Klein Underwear is also unveiling its coverage level system, which defines all bras as falling under levels one, two and three, with level three offering the most coverage and support.

Mikael Jansson shot the fall campaign in New York City. It is comprised of print, digital and outdoor advertising that will roll out in conjunction with October magazine issues.

“Calvin Klein has always put forth such beautifully executed campaigns,” Saldana remarked. “It’s very exciting for me to be associated with such an iconic, globally recognized brand like Calvin Klein Underwear.”