To receive more info from Musotica about a particular product, Click on the photo (photo will enlarge). 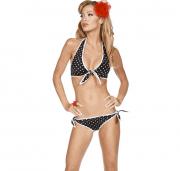 (Filed Under Wholesale Swimwear News). Musotica is expanding its wholesale offerings. In addition to the hand-made crochet styles it has offered to retailers since 2008, the company has added its best-selling Lycra swimwear styles to its wholesale line, and will release additional looks over the next two months. The line includes bikinis and one-pieces wholesaling for $25 to $29, respectively, and available in sizes S through XL.

Sarah Wallner, founder of Musotica, which doubles as a retail business, reported that she launched Lycra swim at wholesale due to its success. “We wanted to add the line because it has been a retail bestseller for 10 years,” she said. “The designs are timeless and never go out of style. We keep adding new colors and fabrics to keep it modern and in style according to season. We have timeless one pieces, pin up dresses that can be worn in the water and classic bikinis.”

Lycra styles currently available at wholesale include Sweet Cheeks Bikinis, Glamour Bikinis and Paris One Pieces, with all boasting a pin-up inspired flair. Sweet Cheeks features a tie front halter-top and ¾ coverage bottom, and is available in solid colors and prints like pink plaid, black and white skulls and red and white polka dots. Glamour is a vintage-inspired bandeau top with detachable front tie in solid colors and a hot pink and white, red and white and black and white polkadot print. Paris includes a front halter and low-rise bottom. It is offered in metallic gold and silver, as well as purple, black, red and yellow. Prints include baby pink skulls on black and red and white polkadots.

In the crochet line of swimwear, which women can also wear as lingerie, Musotica continually adds new colors and styles to its wholesale offerings. Wallner reported that the company has added the Jamaica One Piece “because we got requests [on our retail site] for crochet for Jamaica vacations, so we decided to make Jamaican-style crochet one pieces.” The Jamaica One-piece at wholesales for $45 and comes in a combination of red, yellow and green.

Wallner said that intimate apparel retailers have begun picking up Musotica’s crochet line. “Lingerie boutiques have finally discovered that our crochet line is not just swimwear but also can be sold as lingerie,” she remarked. “For example, the crochet one pieces can be sold as lingerie rompers, the dresses can be sold as baby dolls or cover ups for the beach. Crochet dresses have been spotted on red carpets in Hollywood, bikinis can be worn in the bedroom, especially our sheer crochet bikini with beads, which retailers can sell next to La Perla or Cosabella lingerie.” Surf shops have also been showing an interest in the line, she said.

Musotica has also been generating interest among celebrities, including Playmate Shauna Sand, who has worn crochet styles everywhere from the red carpet to the beach. Other celebrities spotted wearing the brand’s designs include Paris Hilton, Misha Barton and Tila Tequila.