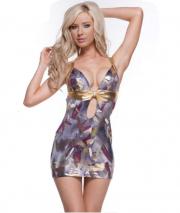 (Filed Under wholesale Dancewear News). Leslie Aisenman, president of Sharron Leslie Designs, is extremely pleased with his company’s performance this April. “Our shipping was about double that of the previous months this year,” he said. “It was the biggest I’ve seen in many a month. It felt like old times.”

Aisenman attributed much of the company’s success to “the new direction Sharron [designer Sharron Aisenman] has taken with young, vibrant designs.”

He added that much of the company’s success during the month came out of the success of the new supplement in its 2009/2010 catalog, as well as the catalog itself, which the company debuted at the fall 2009 installation of ILS, and exhibited once again at the spring 2010 edition of the show. “We had a fabulous reaction,” he said. “For the first time ever, every single person who sat down and worked with us left paper without a single exception. I’ve had wonderful shows before, but never that.”

Sharron Leslie’s new dresses and gowns sold especially well, according to Aisenman, as well as its two-piece sets. Best-selling styles included the Apron Skirt Set with “a playful skull print” and matching triangle bra with ruffle trim; the Center of Attention dress, a sculpted princess cut dress with lacquered foil print; and a series of dresses in metallic slinky material with hologram braided trim.

Check out images of Sharron Leslie’s new designs by clicking on the “For More Info” tab below!