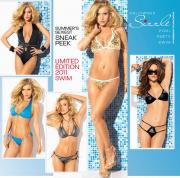 (Filed Under Financial and General Interest News). After announcing last week that Blue By Yoo is producing its licensed swimwear, Frederick’s of Hollywood has released images of some of the styles seen in the line’s limited edition collection, which will be available for purchase on May 17. The company has also revealed the lines name, Hollywood Sizzle by Frederick’s of Hollywood. The six styles previewed are available in sizes S through XL for a retail price range of $88 to $108. The company will show the full line at this July’s Miami Swim Show.

According to the company, Hollywood Sizzle is inspired by some of the sexy lingerie designs “that made the Frederick’s of Hollywood brand iconic.” Silhouettes range from deep plunging belted one-pieces to the Tinsel Town bikini, decorated with gold sequins. It also includes the I Do bridal bikini and matching train sarong.

Check out looks from the Hollywood Sizzle by Frederick’s of Hollywood sneak peak by clicking on the “more info” tab below!