To receive more info from MaleBasics about a particular product, Click on the photo (photo will enlarge).

A jock style from Priape. 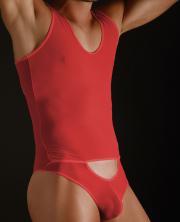 (Filed Under wholesale Men's Underwear News). MaleBasics thinks men should be able to have fun with lingerie too. The designer and retailer of men’s underwear has launched its first line of men’s lingerie, wholesaling for $6 to $8 and available in sizes S/M and L/XL. Retailers who have picked it up include Erogenos.com, Skivvies in Dallas, Tex. and UnderGear.com. The line includes 11 styles including lace boxers and jockstraps; mini shorts; microfiber thongs; and g-strings.

And if you think there isn’t a demand for men’s lingerie, think again, says Raul Valencia, co-owner of MaleBasics with his business partner, Paula Zuniga. “Our brand has not only done well in the gay market, but we have had tremendous demand from women’s lingerie shops and sex shops all over North America, which makes us believe there is a huge void in this segment,” he said.

Zuniga made her debut as a designer by constructing the lingerie line, which comes in a washing machine-safe bag. She commented: “I believe that men should look sexy and enjoy the great range of fabrics and possibilities we women have. Why not, right?

“[I define men’s lingerie as] underwear that you would only think women would wear and use, but now it is available for men […] When you think about sexy underwear usually women’s lingerie comes to mind, [with it’s] lace, see through fabrics, microfibers, push up technologies; everything to make women look sexy. Well Lingerie MaleBasics offers the same for men.”

Although Zuniga said “gay men are loving [Lingerie MaleBasics],” she sees the market for the product as spanning the spectrum of sexual orientations and ages. “Since Lingerie MaleBasics is innovative it has had a great response among different types of men,” she said. “I recently gave one of my girlfriends the ruffled V-thong in turquoise [and the] lace boyshorts for her to fool around with her husband, and they are in their early 20’s.”

In addition to North American stores, the company is selling the line in Bulgary, Germany and Australia. They are currently negotiating distribution agreements in the UK and Austria.

When asked whether the company plans to expand on the line in coming seasons, Zuniga quipped: “Of course! We want to keep spicing up peoples lives!”