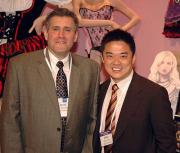 (Filed Under Fashion News). Leg Avenue has hired David Weinstein, a veteran of the costume industry, as key accounts manager of the company. Previously, Weinstein worked for Disguise for 14 years. In his new position, he is responsible for maintaining and building relationships with large retail accounts, including Spencer’s and Party City.

He comes to his position with a great admiration for the iconic brand. “Leg Avenue has always intrigued me,” he remarked. “They have a superb infrastructure in place to support sales. They are a family-run operation that competes with the major players in the Halloween business. Leg Avenue is the only official brand in the costume business that customers ask for by name. They are even asking for the children’s costume line, Enchanted, which has only been around since last Halloween season.

“My intention [in my new position] is to increase the awareness among our key accounts, many of whom I have worked with extensively during my 14 years with Disguise. I intend to concentrate on our strengths, knowledge and resources to increase sales and sell-through for retailers.”