To receive more info from Faire Frou Frou about a particular product, Click on the photo (photo will enlarge). 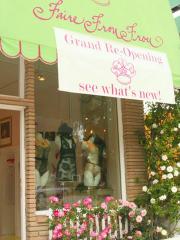 Faire Frou Frou: The front of the remodeled store.

In an April 16, 2010 post, the retailer’s blog read: “It has been a long, exhausting journey, but the bright spot has been re-opening Faire Frou Frou and seeing our customers again. Our store was completely gutted after the flooding, which provided an opportunity to completely remodel the store. Though we kept much of our original look we updated with a few changes. For instance, we created the champagne bubbles ‘frou frou chandelier.’”

The retailer also painted its floors with a high-gloss green and white zig-zag pattern instead of the checker pattern seen before, reupholstered chairs with organza silk with a glossy white frame, and put white sheepskin rugs in the fitting rooms instead of the carpet previously used for “a much cleaner look.”