To receive more info from Rubie’s about a particular product, Click on the photo (photo will enlarge).

Evanora ostume from ’Oz the Great and Powerful’

Added: Mar 2013
Glinda ostume from ’Oz the Great and Powerful’

Added: Mar 2013
The Wicked Witch Costume from ’Oz the Great and Powerful’ 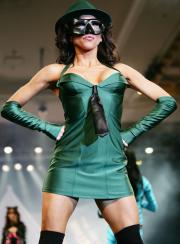 (Filed Under wholesale Costume News). At this week’s ILS, Rubie’s Costume Company revealed some of its new licensing agreements to BODY. The company confirmed that it has the license for hit MTV reality series “Jersey Shore.” Rubie’s also has the license for upcoming blockbuster “The Green Hornet,” which is slated to hit movie theaters on December 22, 2010. The company showed a Green Hornet costume at ILS’ runway show.