To receive more info from Shadowline about a particular product, Click on the photo (photo will enlarge). 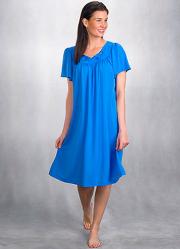 (Filed Under wholesale Sleepwear News). Fans of Shadowline will be excited to learn that the shuttered brand will begin re-launching in stores this summer. Velrose Lingerie, founded in Philadelphia in 1914, purchased Shadowline, a privately owned U.S. sleepwear, daywear and loungewear company, last fall.

It will initially introduce seven styles and eight colors from the Petals sleepwear collection at wholesale prices comparable to the line’s previous pricing, set to begin hitting stores in August. Sizes will range from S through 3X. Based on retail demand, the company plans to eventually make Petals available in petite sizing.

Overall, Velrose reported that it has purchased over 150 sleepwear patterns “to continue Shadowline customer favorites.” The company will also launch best-selling daywear and pants for fall 2010, followed by the Silhouette sleepwear collection for summer 2011. Laurie Fisher, director of sales for Velrose Lingerie, commented: “[Silhouette’s] pattern and fit will remain, with the original lace and tricot unique to this Shadowline favorite.”

Alan Rifkin, owner of Velrose Lingerie, worked closely with Sherrod Salsbury III, the owner of Shadowline, to ensure that re-introduced products will meet Shadowline’s signature good quality, according to Fisher. “Alan Rifkin wanted to be sure it wasn’t just the Shadowline name he was buying…that his product wasn’t going to be just another ‘knock-off,’” she said.

Fisher described Shadowline’s typical customer as a woman aged 35-plus, who was attracted to the brand’s traditional comfortable sizing, and appreciated its “generous fit and flattering styles.” Department, specialty and Internet stores carried the brand, including Belk; Dillard’s; Von Maur; HerRoom.com; Arizona Mail Order and National Wholesale. She reported that customers in 61 countries purchased it.

Overall, she said the response to Shadowline’s website (ShadowlineLingerie.com) has been “tremendous. Customers, retailers and overseas distribution agents have responded and thanked the owner for bringing back an American tradition.”

The Velrose line produces traditional and contemporary branded and private label daywear and sleepwear, which is sold by large catalog and Internet retailers, including Catherines. For further information, contact Fisher by calling (704) 348-0946, or e-mailing LaurieFisher@VelroseLingerie.com.