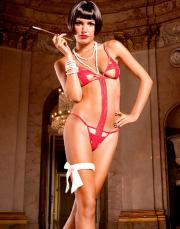 (Filed Under wholesale Lingerie News). Internetmarketing-Miami, LLC, the owner of the rights to Baci Lingerie, a sexy lingerie company making its debut as the main sponsor of the International Lingerie Show (ILS) this April, has signed another sponsorship agreement with a major tradeshow. Through a three-year deal with Venus International Trade Fair in Berlin, Germany, the company reported that Baci Lingerie will serve as its only “Platinum” sponsor, and will be displayed prominently throughout the show. The next Venus show is scheduled to take place from October 21 through 24, 2010.

Baci Lingerie will also be the main sponsor of the Adult Entertainment Expo in Macao, Asia this August, and reported that it is close to signing a multi-year agreement with its directors. To complement the official sponsorships of the trade shows, the company is in the process of constructing four “extravagant” booths for display at a total cost of approximately $3,400,000.

Rosen commented: “The booths, which will be in the United States, Europe, Russia and Asia, will have a luxurious mystique that has never been done before in the lingerie industry.”

Internetmarketing-Miami, LLC is a privately held company based in Miami, Fl. For further information, e-mail info@Baci-Lingerie.com.