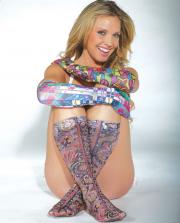 (Filed Under wholesale Hosiery News). Just two weeks before this February’s MAGIC, Celeste Stein, chief executive officer and founder of Celeste Stein Designs, had an idea: to bring back the ringer socks that put her on the map approximately 30 years ago. So the company’s team got busy making the patented designs, and adding select pre-existing prints to them as well as a new touch: rhinestones. The company has also added glitz to its armbands, leg warmers and headbands, among other products.

Dori Golan, Stein’s daughter and president of Celeste Stein Designs, said: “My mom is a rhinestone queen! Everything she owns has glitz on it. We had such an amazing response to the ringer socks with rhinestones on them at MAGIC. We have rhinestones in several different qualities. Clients are mostly buying the mainstream, plastic rhinestones, which are really nice and affordable.”

The ringer socks are shipping to stores in late March; however, Golan expects them to hit larger retail stores for back-to-school 2010. Its cuffed ‘ring’ end made from mesh is the distinguishing feature of the retro-inspired style. Golan added: “It’s a three-dimensional sock. A lot of the styles have texture built right into the material.” They run in one-size-fits-most. Celeste Stein Design’s socks retail for approximately $8 to $13.

In other news, the company is also adding 35 new prints for spring, as well as between 15 to 20 additional prints for fall 2010. The self-described “American Printcess” currently makes over 2,000 prints, and has designed and manufactured over 2 million pairs of printed socks, tights and leggings from its sublimation printing facilities in Galveston, Texas. According to Golan, all prints can be used on any product that the company manufactures.