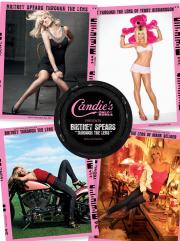 An image from the Candie’s spring campaign.

(Filed Under Fashion News). For the second consecutive year, Britney Spears is the face of Candie’s. Iconix Brand Group, Inc, the parent company of the junior brand, has unveiled its spring 2010 marketing campaign, coined “Britney Spears Through The Lens,” featuring images of the pop star in Candie’s intimates and fashion apparel shot by renowned photographers Annie Leibovitz, Mark Seliger and Terry Richardson. Candie’s is exclusive to Kohl’s stores.

Of note are Seliger’s shots, featuring Spears in a dressing room that recalls French burlesque, and a contrasting image of her with a pink Harley-Davidson motorcycle. The campaign will debut with a four-page insert in the April issue of Seventeen Magazine, as well as on Candie’s and Kohl’s websites.