New At Dreamgirl For Halloween 2010 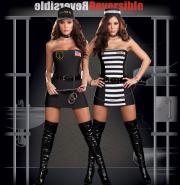 (Filed Under wholesale Costume News). Eric Ehrens, president of Dreamgirl International, reported that the company will have select costumes available year-round for the first time starting this January. “We are taking 21 of our best-sellers, and transitioning them to be available for purchase all year,” he commented, adding that the company will continue to add to its year-round selection based on demand.

Overall, the 2010 Halloween line will include 147 new and 102 carryover costumes, which is slightly larger than last year’s offerings. This season, the company focused on building up it couples costume offerings.

“We have found that guys are going out [for Halloween] as well, but usually it’s their girlfriends who dress them up,” Ehrens said. “[Therefore], all of the men’s costumes we have launched go with a female counterpart.”

The company is also in the process of finalizing approximately 30 junior costumes, which are based on its best-selling costumes, but offer more modest, age-appropriate styling.

The company also focused on expanding its accessory and leg warmer assortment for the season, as well as its first wigs, for a total of 50 accessories. It built on its popular costumes by offering “new twists” to tried-and-true favorites.

In addition to the reversibles, Dreamgirl is expanding on its light-up costume, also launched in 2009 with select styles including the Light-Up Blue Fairy, a best-seller.

In the fit and coverage front, Dreamgirl is working on innovations that will allow a woman to adjust the amount of coverage in her costume to her preference. “The new concept will allow for less or more skin exposure, depending on the wearer’s preference,” Ehrens said.

New At Dreamgirl For Halloween 2010
Dreamgirl’s Halloween 2012 Runway Preview
Dreamgirl at The Cosmopolitan
Dreamgirl: Costumes That Light Up
2012 Halloween Looks on Display at HIA Show
Buyers Flock To Houston Halloween
HIA Kicks Off Halloween Show Season
How Was Halloween At Marsha’s Menagerie?
Dreamgirl Costumes on the Runway