To receive more info from Disguise about a particular product, Click on the photo (photo will enlarge).

New At Disguise for Halloween 2010 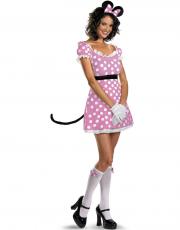 (Filed Under wholesale Costume News). 2010 is a big year for Disguise in the adult market. After delving into licensed women’s Halloween costume portfolios with the introduction of the Women of Marvel collection in 2009 “[to] resounding success,” according to Stephen Stanley, co-president of Disguise, a division of JAKKS Pacific, Inc., it has drastically increased its young women’s offerings for the 2010 season with lines based on upcoming blockbusters including Tim Burton’s “Alice and Wonderland,” produced by Walt Disney Pictures; “Iron Man 2,” produced by Marvel Entertainment; Disney’s “Toy Story 3,” and “Prince of Persia: The Sands of Time,” starring Jake Gyllenhall and Gemma Arterton.

Due to its flirtatious rather than risqué styling, the company calls its more coquettish costumes “sassy” rather than sexy, and describes sassiness as meaning “stylishness, flirtatiousness and fun.” The “Fabulous Flirts by Disguise” collection encompasses all sassy styles seen throughout many of Disguise’s licensed character lines. In addition to sassy styles seen based on the new blockbusters, the company has also launched them under classic movie favorites.

Stanley described growing in the adult Halloween market as the natural progression for Disguise. “We have been known for many years as a kid’s licensed costume company, and we are the clear leader in that market,” he said.

“Now, leveraged by the world’s best-known and beloved characters, we are excited to pursue the young women’s costume marketplace in a big way. If you walk into any one of the temporary Halloween stores [seen nationwide during the season] you will most likely find walls and walls of the typical sexy costumes, [such as] French maids, tavern wenches and naughty nurses. Disguise, [on the other hand] is offering sassy licensed versions of some of the world’s most well-known characters, from Cinderella to Pinocchio to Optimus Prime [from “Transformers”] to Jack Skellington [from Tim Burton’s “The Nightmare Before Christmas”] to Big Bird.

“Our ‘Fabulous Flirts by Disguise’ line brings freshness and excitement to the marketplace that will only increase sales for everyone.”

Stanley expects the sassy costumes designed based on this year’s upcoming blockbusters to be extremely successful. Of particular note, he said, is Princess Tamina from Disney’s “Prince of Persia: The Sands of Time,” as well the Ironette and Black Widow styles based on “Iron Man 2,” which will also fall under Disguise’s “Women of Marvel” line. The company is also adding a female version of Raphael from “Teenage Mutant Ninja Turtles,” coined Raphaela, to the Fabulous Flirts range, and adding Storm (from X-Men) and Wild Thing (daughter of Wolverine) to the “Women of Marvel” collection, among others. He also expects Alice from Tim Burton’s “Alice In Wonderland” to be a smash-success.

In addition to its licensed movie and show costumes, the company has secured the license to produce a range of adult Halloween costumes under the name Dark Bazaar based on the artwork of Clive Barker, a revered artist, writer and film director specializing in the dark fantasy genre, and best-known for his work directing the “Hellraiser” series. According to Stanley, this marks the first time Barker has personally licensed his artwork for the Halloween market. Among the women’s costumes seen in Dark Bazaar are Serpent Seductress and Queen of Skulls, which he described as “stand-outs in the line.”

He described Dark Bazaar as adding a unique element not currently seen in the adult costume market. “The idea is to create a whole, new Halloween with a dark, fantastical, rather than horror, element.”

Overall, Stanley sees Disguise’s expanded Fabulous Flirts line as giving the Halloween market that unique touch it has been missing. “We feel the time is right to bring classic licensed characters to the young women’s market in a big way,” he said. “Young women want stylish costumes that are also fun and flirtatious. Although some of the sexy costumes already in the market are stylish, the majority go over the top and lose their fashionability by showing way more skin than the average female consumer really wants. Fabulous Flirts by Disguise brings a much-needed ‘sassy’ fashion element into the adult Halloween market that will resonate with today’s young women.”