To receive more info from Cake Lingerie about a particular product, Click on the photo (photo will enlarge). 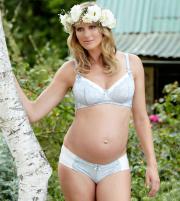 Bra and panty set by Cake Lingerie in French Vanilla.

(Filed Under wholesale Maternity News). In designing its latest collection, coined Let Them Eat Cake, Australian-based Cake Lingerie was inspired by vintage wallpapers, china tea sets and classic Hollywood Glamour. According to the producer of branded maternity intimates, Let Them Eat Cake is as "elegant, fashionable and tasteful" as the company’s previously-launched collections.

Included in the line are matching bras and panties wholesaling for $27 to $32 and $12 to $15, respectively, with bras available in sizes 32 to 38, B through G. The lingerie is made from soft lace, stretch fabrics and satins. Also featured are mix and match sleepwear pieces made from modals and cotton “[that are] every bit as indulgent as the underwear,” according to the company.

Owner Tracy Montford founded Cake Lingerie in 2008 following the birth of her son, at which point she noticed a lack of appealing maternity lingerie available on the market. Her husband, Keith Hyams, serves as marketing manager of the company. The brand can found in the U.S. at specialty stores and internet retailers including A Perfect Fit Fine Lingerie in Tustin, Calif; La Rouge in Laguna Beach, Calif; and e-tailer PantySalad.com. It can also be found internationally in countries including Australia; Israel; The United Kingdom; Germany; and Japan, among others.

For further information, email the company’s West Coast U.S. sales rep at TheGigShowroom@aol.com, or its East Coast rep at DlrBra@aol.com.