To receive more info from Ea Lingerie about a particular product, Click on the photo (photo will enlarge). 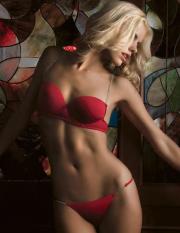 (Filed Under wholesale Lingerie News). When former general manager of Ea Lingerie, Liliana Gomez, took over as COO of the company about six months ago, she paid close attention to what customers were asking for. The company’s spring/summer 2010 collection, titled La Femme Fatale, is reflective of what she discovered; customers want lower prices, a wide variety of sizes and basic styles. La Femme Fatale’s 22 styles, which consist of bra and bottom sets, wholesale for $9 to $42, which is about 25 percent less the previous collections’ prices; “but without losing our signature quality,” Gomez said. Additionally, starting this month, basic bras, which currently from 34 to 36, B through C, will run from 32 to 38, B through D. At that time, the company will also add an XL size to its basic bottoms, which currently run from S through L. Gomez plans to continue adding more sizes to the Ea’s merchandise.

In terms of styling, La Femme Fatale includes more basic styles than in the past, which Gomez defined as meaning “more solid colors and less accessories, because this is what we noticed the market asking for.” The collection also includes an assortment of boyshorts and panties, while in the past Ea’s bottoms mostly consisted of thongs. Bras consist of full-cup and demi styles.

In other news, the company has hired Jeff Kretchmer as its sales representative in the Dallas, Tex. territory. “We met Jeff at the Dallas market, and he was immediately impressed with the quality and price range of our line,” Gomez said. “We are very excited to add him to the team.”

As of adding Kretchmer, the company now has sales representation in Dallas, Los Angeles and New York City, and continues working toward expanding its nationwide presence. Currently, Gomez is seeking representation in Florida.

Gomez described the company’s customer base as mainly comprised of women with B to C cup sizes ranging in age from 22 to 45-years-old. Retailers carrying the brand include Tojours in San Francisco, Calif; e-tailer Bella Bella Boutique; MPassion in Worthington, Ohio; and Bonne Nuit in Walnut Creek, Calif., among others.

Ea Lingerie is headquartered in Miami, Fl., and has additional offices in Mexico, Colombia and Spain. For further information, contact Gomez: (305) 849-3105, Coo@EaLingerieUSA.com.