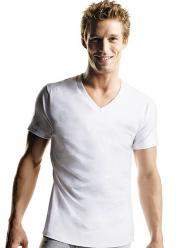 (Filed Under wholesale Men's Underwear News). Hanes has introduced its first dyed V-Neck underwear T-shirts for men in shades of black, navy and gray, previously offered exclusively in white. Known for its classic, basic styling, Hanes has recently delved into the color arena with its men's underwear shirts, first by offering dyed underwear T-shirts in crew collar and sleeveless tank styles. The new dyed V-Necks hit mass merchandise stores on Black Friday (November 27th, 2009) at a suggested retail range of $2.50 to $5 per shirt. The shirts will expand to mid-tier department stores shortly, the company reported.

Hanes, a flagship brand of Hanesbrands Inc., can be found at Kohl’s, JCPenney and Walmart, among many others.