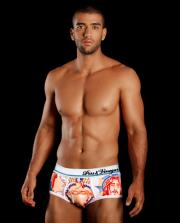 (Filed Under wholesale Men's Underwear News). Jason Sutherland, founder and former CEO of Ginch Gonch, has launched the holiday collection “I Love…” under his new brand, Piss & Vinegar. In addition to this brand, Sutherland also showed two other new brands of men’s underwear, Dick & Jane and Expose, at this September’s POOL tradeshow in Las Vegas.

According to the company, Piss & Vinegar—which is named after the British slang expression “meaning to live young at heart”—is more grown-up than Ginch Gonch, but maintains Sutherland’s signature provocative style, while conveying the message “that encourages guys to appreciate what life has to offer.” Styles in the holiday line include briefs inscribed with “I Love Buddha,” and a second brief style that reads “I Love Jesus,” as well as “I Love Girls” and an “I Love Boys” briefs. Other silhouettes include boxer briefs, low-rise briefs and jockstrap made from 94 percent Pima cotton and 6 percent Lycra featuring a microfiber waistband.

“We chose to introduce the ‘I Love…’ with Jesus and Buddha because whether you subscribe to their doctrines or not, there is no denying that each man became an icon by living his life to the fullest and living it from the heart,” Sutherland commented.