To receive more info from Anita about a particular product, Click on the photo (photo will enlarge). 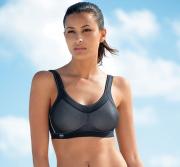 (Filed Under Fashion News). Steven Bernstein, the new GM and national sales manager of Anita GmbH’s U.S. division, has found an exciting match of the company’s “illustrious history” and his unique skill set within the intimate apparel industry. “After many years of consulting, I was looking for a stable home with a company both financially stable and technologically advanced in which to continue my career,” he commented.

“I began my lingerie/swimwear career in 1983 at Roxanne Swimsuits, a division of MiLady Bra and Corset, which was established in 1911 as a family-owned business. Anita, a 123-year-old privately-held company, is another tried and true family-owned company. I have acquired a reputation in the industry based on fit, function, and performance at retail…all critical aspects of Anita’s growth-model.”

Throughout his 26-year career, Bernstein has served in a variety of merchandising, product development and sales capacities for small-to-mid-sized intimate apparel companies including the development of Lunaire in 1995, and Figleaves.com, which he co-founded in 1999. In his new role with Anita, he plans to continue on the company’s product and category expansion path. In addition to the maternity and nursing intimates the company is known for, Anita has expanded into the fashion and basic bra-silhouettes, active/sports bras, cup-sized swimwear and post-mastectomy categories. Bras run in band sizes 32 to 50, A through H cup, at a wholesale range of approximately $22 to $60.

“My plan is to continue to grow the brand by increasing distribution of innovative styles despite challenging economic times,” he said. “We have been experiencing quantifiable growth within the last two selling seasons, which gives us a great outlook going into 2010. Our strengths lie not only in exceptional product development, including quality and fit, but in our ability as a European-based company to maintain timely deliveries for the American retailer.”

Building on the recent success of its premier fashion line, Rosa Faia, the company will add a “contemporary look” to its nursing and maternity bras and support garments in 2010. “Anita is bringing the pregnant and nursing mother more fashionable, contemporary styles.”

Elements unique to Anita’s nursing and maternity line is the patented Kwik Clip system; “which allows the nursing mother to prepare for breast-feeding with one arm while holding her baby with the other;” as well as the Anita Memo System, which serves as a breast-feeding memory aid for nursing mothers. While driven by soft-cup styles, Anita’s maternity and nursing bras also include underwire styles.

For 2010 under the active bra category, the company will launch styles using a new high-technology fabrication coined Momentum. Bernstein described the garment as breathable yet incredibly supportive in a soft-cup configuration.

“This is a high-intensity seamless sports-bra perfect for full-busted women up to an H-Cup. At the same time, it allows the body to breath, and is comfortable for the wearer. Anita has quickly become a leader in this category based on years of developing compression garments for the medical field, painstaking fit-requirements by cup-size, as well as innovative moisture-management.”