To receive more info from Espiral about a particular product, Click on the photo (photo will enlarge). 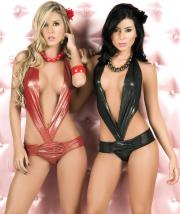 Espiral styles from the 2009 collection.

(Filed Under wholesale Dancewear News). If you happened to pass by Espiral at the April and September 2009 ILS shows, you may have noticed that the brand’s booth was significantly larger than in 2008, (double the size, in fact). At both shows, the Miami-based dancewear and clubwear company—whose product is made in South America—rented an additional 10 feet from the previous year; equivalent in size to an extra booth.

According to Angela Escobar, co-owner of the company, Espiral rented this additional space to accommodate their growing product line. In 2009, the company released a catalog that was 40 percent larger than its 2008 catalog, with 90 percent of styles brand-new. In total, the 2009 catalog includes more than 200 styles and 1,600 skews wholesaling for $2.95 to $24.95 at an average price of $15, and available in sizes S through XL, or SM and ML.

“We wanted to give our customers the best service they deserve, and to do so we needed additional space [at ILS],” Escobar said. “People have been extremely interested in the 2009 catalog due to its variety. We expanded each one of our pre-existing clubwear, dancewear, mix and match and fantasy costume categories, and added a nightwear category, which [encompasses] risqué bedroom-oriented styles that maintain Espiral’s edgy and unique style.”

Continuing on this upward trend, Espiral’s 2010 catalog, which Escobar expects the company to introduce in March of next year, will be 15 to 20 percent larger than this year’s offerings, adding; “customers can expect many new and exciting styles in the 2010 catalog.”

Escobar said customers are attracted to Espiral due to its ability to churn out a large volume of fresh styles. “We do not repeat designs. We improve them, and pay attention to fashion trends. Our products are edgy and trendy, and can be worn in the bedroom or out to the club.

"Most dancewear companies make a limited number of styles that they repeat year after year, and simply update with new fabrics and colors. On the other hand, we introduce a catalog per year comprised almost entirely of new designs. Our designers do research worldwide on trends, which helps us come up with unique styles that appeal to a wide variety of customers on a global level. Our location in Miami is also helpful because the city is such a melting pot of people from around the world. ” She added that the brand boasts "a unique, Latin-American flair."

Espiral can be found nationwide at specialty boutiques including Déjà Vu, Priscilla’s, Fascinations and Peekay stores, as well as e-tailers including Snaz75.com and FlirtCatalog.com.