To receive more info from Baci Lingerie about a particular product, Click on the photo (photo will enlarge). 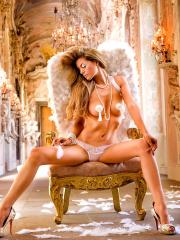 (Filed Under wholesale Lingerie News). Baci Lingerie, a recent start-up, plans to make a bold launch in the U.S. sexier lingerie market next year, supported by the distribution of 50,000 copies of a “500 page hardcover book” of styles and a $500,000 booth at the International Lingerie Show in April.

This from an e-mail interview with Elan Rofé, president of Electric Lingerie. He has been hired as a consultant. According to Rofé, a U.S. company, “Internetmarketing Miami LLC will hold the rights” to Baci. “Several investors from Europe...got the impression the sexy lingerie market is still much too small and will have a great future,” he added, noting that some of the backers are in the jewelry business. Baci is not associated with International Intimates (whose president, René Rofé, is Elan’s father), nor Electric Lingerie, according to Rofé. Baci, which means “kiss” in Italian, will be made in Asia and will feature “crazy low prices” and “beautiful packaging.” Rofé emphasized, however, that quality will remain high. “Nothing more expansive than $6” wholesale.

“We are negotiating with the biggest distribution companies and brand owners in the US,” for the rights to handle the line in the U.S., continued Rofé. “Everyone is welcome to join and meet the representative on Baci to make an offer. The investors will make the U.S. contract not before middle of January 2010. Everyone who would like to be the partner has the chance to negotiate.” He added that Baci representatives plan to be in Las Vegas in January. Distribution “contracts for Australia, Russia, Asia and Europe are already signed,” he said.

Rofé said the lavish launch included the “Most expensive shooting ever (1.600.000 Euros)” which utilized rental of two castles, one in France, the other in Germany, a shooting team that “makes only high fashion productions, like for Prada, Gucci etc.,” and “only international top models.” In addition to the style book, promotional materials will include a high definition video “for net sites and in store promo.” He added that his fee as “head consultant” was one million Euros.

Despite his work for Baci, Elan Rofé remains in command of Electric. He emphasized that “Everything is 100% intact with Hustler,” (Electric recently took over that license), “and running extremely well. We will launch the new catalog (more than 55 new styles) in January.” He added that customers can also expect “many new products” under the Electric label as well.