To receive more info from Magic Silk about a particular product, Click on the photo (photo will enlarge). 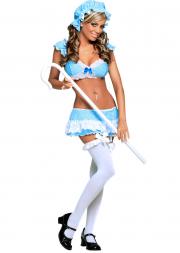 (Filed Under wholesale Costume News). In fall/winter 2008, Magic Silk expanded beyond its lingerie niche with the launch of Cheap Thrills By Magic Silk, a line dedicated exclusively to sexy costumes for wear inside the bedroom and out. According to Barbara Bauer with Magic Silk, the line—which originally included 12 styles—experienced such a successful launch that the company has nearly doubled its size over the last year. It now consists of 24 women’s styles, all available in sizes S to 3X at a retail range of $30 to $40.

With all styles available year-round, Magic Silk has not specifically targeted the Halloween market with Cheap Thrills. The costumes are packaged in a similar fashion as lingerie, which lends itself to year round sales. Nevertheless, the line “has really taken off for Halloween this year,” said Bauer. “This is the first year we’ve had costumes available for the season, and they are doing very well.” The company has already added eight new styles for spring 2010.

Bauer believes that Cheap Thrills works well for Halloween due to its versatility. “The vast majority of costumes in the line can in the bedroom as well as out in public. There is only one sheer costume in the line.”