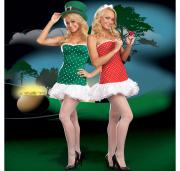 (Filed Under wholesale Costume News). After experienced reported success with their reversible Ladybug/Bumblebee costume (style number 6208), Dreamgirl International has decided to take the reversible costume phenomenon a step further by combining two holidays’ styles into one. This September, the company introduced a reversible Cupid and Leprechaun costume for the upcoming Valentine’s Day and St. Patrick’s Day seasons. The costume is available for retailers to purchase now, and will hit stores in time for Valentine’s Day.

Boasting a similar silhouette to style 6208, the cupid/leprechaun costume runs in sizes S through 1X/2X and is offered a wholesale price of $26.95, which includes accessories for each outfit.

According to Lar Hovsepian, marketing manager for the company, the costume has added value due to its reversibility—of particular importance in this tough economic climate. “This costume is sell-able for [both the St. Patrick’s Day and the Valentine’s Day seasons] at a great value! [It is] two seasons for the price of one. With consumers being more cautious in their spending, they are out to find the best value for their money. Reversible costumes are always a sure way to help [them] see the value of their purchase.”

Los Angeles, Calif.-based Dreamgirl International’s costumes, lingerie and clubwear can be found at sexy retail stores and e-tailers nationwide including Lingerie.com, Priscilla’s and Peekay, Inc. In recent months, a number of retailers have the named the brand as an up-and-comer on the market. For further information, e-mail Lhovsepian@Dreamgirl.com.

Dreamgirl: 2 Seasonal Costumes In 1
Dreamgirl Costumes on the Runway
Dreamgirl: Costumes That Light Up
Dreamgirl Expands in UK at Birmingham Fair
Dreamgirl Shows 2012 Looks in Las Vegas
Dreamgirl Brings Magic To The Vdara
Dreamgirl Releases New Catalog
New At Dreamgirl For Halloween 2010
How Was Halloween At Marsha’s Menagerie?